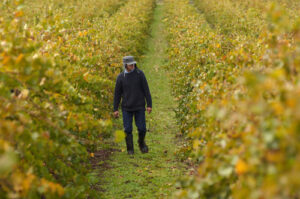 Natural fertilising methods and minimal tillage is used with a move towards biodynamic practices. All this encourages microbiological activity to improve the soil, enable the vines to better mature the fruit and resist disease.

The vineyard trellising system is adapted to the variety and vigour. Generally, whites grown for table wine use a double wire for extra shading. Red varieties are generally on a single wire of various heights. The bush vine style is used for Grenache and Mataro which are used for fortified wines.

The vine shoots are carefully monitored for additional watering from two underground bores to supplement natural rainfall; however it is used sparingly to maximise fruit flavour. All vines are hand pruned with the fruit picked at full ripeness. Many varieties are machine picked at night to preserve freshness. Small premium parcels are handpicked starting in February and going into late April when the super ripe grapes at the tail end of the season.

Ron’s winemaking philosophy is that wine should represent a sense of place and have minimal intervention. He believes that wine is made in the vineyard and always places an emphasis on quality fruit, not the quantity of fruit. Liebichwein wines are 100% Barossa grown sourced from fruit growing on the property at Rowland Flat.

Property – 60 acres in total planted to vines. Located on the eastern slopes of Rowland Flat, at the southern end of the Barossa Valley between the townships of Lyndoch and Tanunda.

Grape Varieties – Liebichwein grows a remarkable array of grape varieties – 14 in total. The first plantings were in 1969 and with subsequent plantings from the 1990’s.

Liebichwein Home Barrel Competition Do you have your own home barrel? Are you proud of how it is developing? Would you like feedback from an experienced winemaker? Liebichwein run this...

What is a Leveret you may ask? It is the French term for a baby hare, which narrowly escapes being run over by the tractor from row to row. Ron...

All the traditions of the long-running Barosa Vintage Festival were celebrated in April 2019. We had a ball celebrating a century...